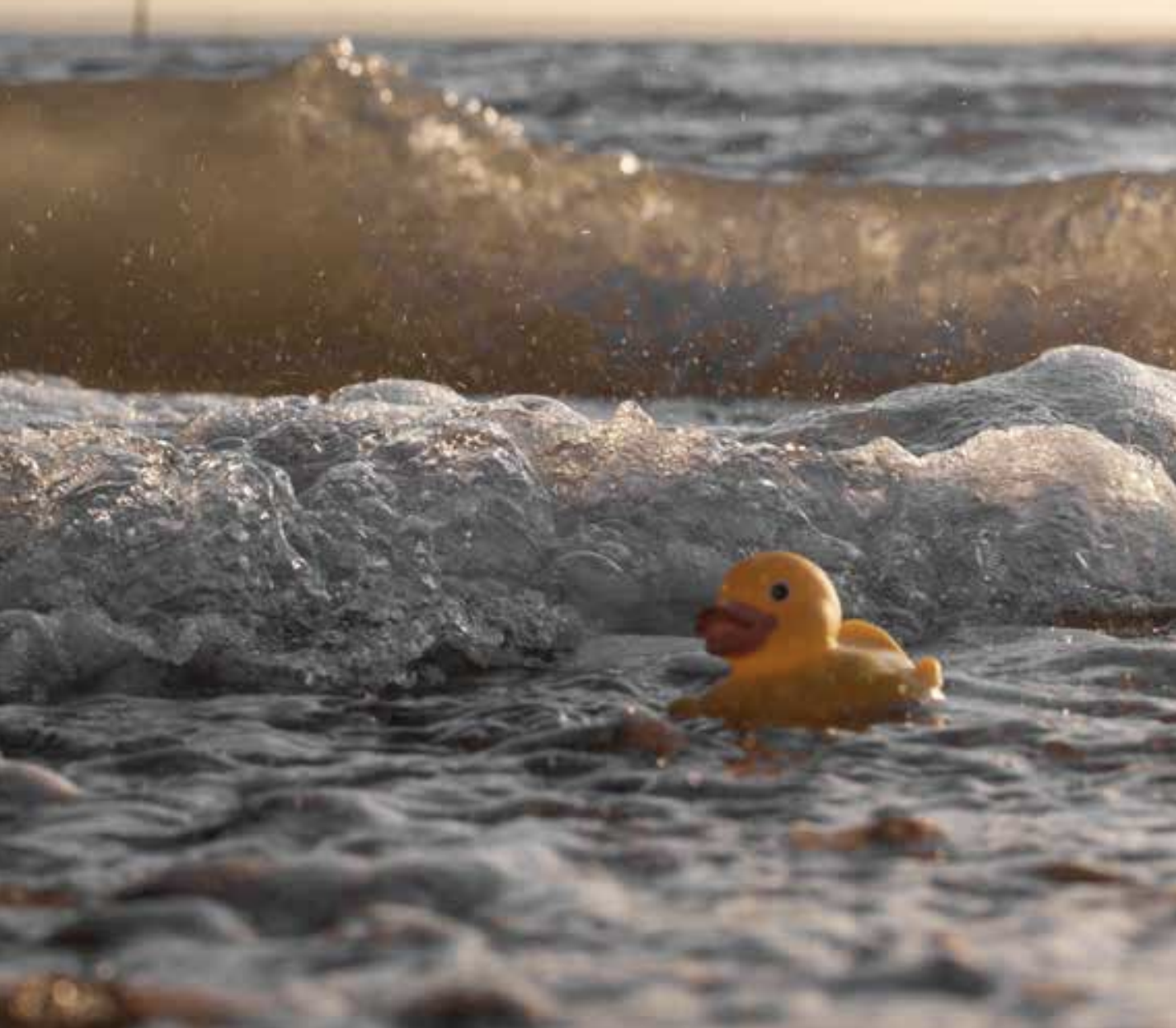 The objective of this post is to provide a concise summary of some of the key issues surrounding the biodegradability of plastics in the oceans, and whether the adoption of biodegradable plastics will reduce the impact of marine plastics overall.

One of the principal properties sought of many plastics is durability. This allows plastics to be used for many applications which formerly relied on stone, metal, concrete or timber. There are significant advantages, for food preservation, medical product efficacy, electrical safety, improved thermal insulation and to lower fuel consumption in aircraft and automotives. Unfortunately, the poor management of post-use plastic means that the durability of plastic
becomes a significant problem in mitigating its impact on the environment. Plastics are ubiquitous in the oceans as a result of several decades of poor waste management, influenced by a failure to appreciate the potential value of ‘unwanted’ plastics, the underuse of market-based instruments (MBIs), and a lack of concern for the consequences (GESAMP 2015).

The principal reasons plastic ends up in the ocean are:

• Inadequate waste management by the public and private sector;
• Illegal practices;
• Littering by individuals and groups;
• Accidental input from land-based activities and the maritime sector, including geological and meteorological events;
• A lack of awareness on the part of consumers, for example of the use of microplastics in
personal care products and the loss of fibres from clothes when washed.

Plastics are ubiquitous in the oceans as a result of several decades of poor waste management, influenced by a failure to appreciate the potential value of ‘unwanted’ plastics.

Efforts to improve waste management and influence changes in behavior, on the part of individuals and groups, face many challenges, and the results of mitigation measures may take many years to demonstrate a benefit (GESAMP 2015).

The degree to which ‘biodegradable’ plastics actually biodegrade in the natural environment is subject to intense debate.

It has been suggested that plastics considered to be ‘biodegradable’ may play an important role in reducing the impact of ocean plastics. Environmental biodegradation is the partial or complete breakdown of a polymer as a result of microbial activity, into CO2, H2O and biomasses, as a result of a combination of hydrolysis, photo-degradation and microbial action (enzyme secretion and within-cell processes). Although this property may be appealing, it is critical to evaluate the potential of ‘biodegradable’ plastics in terms of their impact on the marine environment, before encouraging wider use.

A material may be labelled ‘biodegradable’ if it conforms to certain national or regional standards that apply to industrial composters, not to domestic compost heaps or discarded litter in the ocean. Equally important is the time taken for biodegradation to take place. Clearly the process is time-dependent and this is controlled by environmental factors as well as the properties of the polymer. The environmental impact of discarded plastics is correlated with the time taken for complete breakdown of the polymer. At every stage there will be the potential for an impact to occur, whether as a large object or a nano-sized particle.

There is considerable debate as to the extent to which plastics intended to be biodegradable do actually biodegrade in the natural environment. This extends to the peer-reviewed scientific literature but is most intense between those organizations that can be thought to have a vested interest in the outcome, such as the producers of different types of plastics, the producers of additive chemicals intended to promote degradation and those involved in the waste management and recycling sectors.

Deciding what constitutes best environmental practice through the choice of different plastics and non-plastics is not straightforward. Life Cycle Assessments (LCA) can be used to provide a basis for decisions about optimal use of resources and the impact of different
processes, materials or products on the environment. For example, LCA could be employed to assess the use of plastic-based or natural fibre-based bags and textiles, and conventional and biodegradable plastics. In one LCA–based study of consumer shopping bags, conventional PE (HDPE) shopping carrier bags were considered to be a good environmental option compared with bags made from paper, LDPE, non-woven PP and cotton, but strictly in terms of carbon footprints (paper to cotton in order of increasing global warming potential; Thomas et al. 2010). This analysis did not take account of the social and ecological impact that plastic litter may have. In contrast, an analysis of textiles – that included factors for human health, environmental impact and sustainability – placed cotton as having a much smaller footprint than acrylic fibres (Mutha et al. 2012). However, it is important to examine what is included under such broad terms as ‘environmental impact’. For example, a third study which also performed an LCAbased assessment of textiles concluded that cotton had a greater impact than fabrics made with PP or PET, and a much greater impact than man-made cellulose-based fibres (Shen et al. 2010). This was on the basis of eco-toxicity, eutrophication, water use and land use. Neither textile-based LCAs considered the potential ecological impact due to littering by the textile products or fibres. Clearly, the scope of an environmental LCA can determine the outcome. Ecological and social perspectives should be included in a comprehensive LCA approach, as well as the time-scales involved. Without such evaluation, decisions made in good faith may result in ineffective mitigation measures, unnecessary or disproportionate costs, or unforeseen negative consequences.

As with all such assessment studies, it is very important to consider the scope, assumptions, limitations, motivations, data quality and uncertainties before drawing conclusions about the study’s validity and wider applicability.

2. Polymers and plastics terminology and definitions.

2.1 The need for precise definitions.

There is great scope for confusion in the terminology surrounding ‘plastic’ and its behavior in
the environment. The term ‘plastic’, as commonly applied, refers to a group of synthetic polymers.

Polymers are large organic molecules composed of repeating carbon-based units or chains that occur naturally and can be synthesized. Different types of polymers have a wide range of properties, and this influences their behavior in the environment.

Assessing the impact of plastics in the environment, and communicating the conclusions to a disparate audience is challenging. The science itself is complex and multidisciplinary. Some synthetic polymers are made from biomass and some from fossil fuels, and some can be made from either. Some polymers derived from fossil fuels can be biodegradable.

3.1 A number of studies have shown that attitudes towards the marine environment are influenced by age, educational level, gender and cultural background. Very few studies have been conducted on attitudes to marine litter and on the factors that contribute to littering behavior (Whyles et al. 2014).
A study of attitudes of European populations found that Governments and policy were considered to be most responsible for the reduction of marine litter, whereas environmental groups were considered to be most capable of making a difference (Bonny Hartley pers. comm.).
Human perceptions influence personal behavior, legislative and commercial decisions. Some, albeit limited evidence suggests that some people are attracted by ‘technological solutions’ as an alternative to changing behavior. In the present context, labelling a product as biodegradable may be seen as a technical fix that removes responsibility from the individual. A perceived lower responsibility will result in a reluctance to take action (Klöckner 2013). A survey of littering behavior in young people in Los Angeles revealed that labelling a product as ‘biodegradable’ was one of several factors that would be more likely to result in littering behavior (Keep Los Angeles Beautiful, 2009). Whether similar attitudes occur in different age and cultural groups and in different regions globally is unknown, and more research is justified.

Labelling a product as biodegradable may be seen as a technical fix that removes responsibility from the individual.